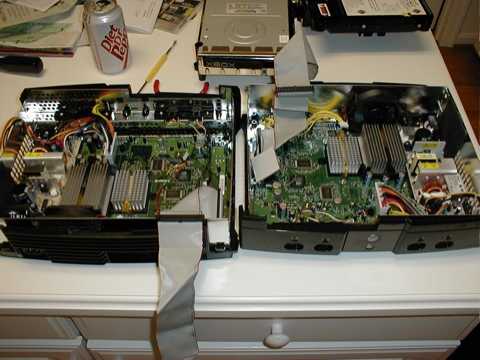 Microsoft's XBOX provides a great platform for the inner hardware-hacker in me. But by 'hardware-hacker' I mean taking stuff apart and soldering a couple wires. I'm definitely not a real hardware hacker, like some of the guys I know. However, I do enjoy playing around with a piece of hardware in the take-it-apart-and-then-reassemble-it Lego mentality.

After reading some articles a couple years back about how Andrew "bunnie" Huang first reverse engineered the XBOX and all of the cool things that were possible with an 'unlocked' system, I decided to buy one and hack it. This involved buying a 'modchip' (I choose the Xecuter model) and soldering it to the XBOX's motherboard. Doing the actual soldering was pretty straightforward, except one wire that was very difficult (the infamous d0 point).

A hacked XBOX allows you to run non-Microsoft approved/certified home-brew software (even Linux!). Over the past few years, several fantastic programs have been written to be run on modified XBOXs. My favorite is the XBOX Media Center (XBMC), which turns an XBOX into an all-in-one multimedia center for viewing pictures, movies, listening to music, and so forth. I like XBMC so much that I went out an purchased and modified a second XBOX to put in my bedroom instead of buying a normal DVD player. Hell, how else could I get a network-enabled CD/DVD/AVI/DivX/MPEG/MP3/Picture viewer for about \$180?

I've helped a bunch of my friends acquire and mod XBOXs as well. After most people see the cool things that can be done with an unlocked XBOX they usually break down and buy one and modify it. Since my soldering skills are pretty weak, my friend Wayne has helped with a lot of the soldering, since what takes me about 30 minutes only takes him about 30 seconds. The picture for this article shows one of my XBOXs and my friend Andrew's XBOX, after it had been successfully modified.