Arion.Net is 25 years old this month. At the quarter century mark, I am feeling quite nostalgic and it’s time to capture some of how Arion.Net came into existence.

I registered Arion.Net in 1996 shortly after I started grad school at Carnegie Mellon University. As a student at the Information Networking Institute, I figured what better way to understand the Internet than to create my own presence. At this time, you really had to self-host everything. There was no AWS, no Google Cloud, no Azure, and no DNS registrars. There were fledgling ISPs but nothing within easy reach of individuals. Also, as a poor student, my goal was to learn as much as possible while outlaying the smallest amount of funds needed. My goal was to discover, and at a minimum, these were the topics I wanted to explore:

I set out looking for a domain name to register. I suppose it is rather vain that I chose Arion but since I was looking to create my own presence, I figured why not? Also, as a relatively obscure and unique word, I assumed it would be available to register. Short domain names, even in 1996, were starting to become rare. To my surprise, there was an arion.com already registered. From my recollection, it was a company in Japan. (Apparently the registration for arion.com lapsed in 1999 and I should have been monitoring this so I could grab it, but meh.) Anyway, arion.net was more suitable in the end — I was studying information networking!

In 1996, there were only a handful of top-level domains. These were documented in RFC1591:

(The RFC goes on to also describe .gov, .mil, and .us as well as the two-character international country code domain names.)

Arion.Net was available and I set about registering it. This was a manual process, which required filling out the “Domain Template” form. This form was available at ftp://rs.internic.net/templates/domain-template.txt. That FTP server is still alive but the template isn’t there anymore. Here’s a copy for posterity. (As a side note, you can download the current root zone from that FTP server if you are interested in knowing every top-level domain live on the Internet!). As described in the above RFC, the use of the .net domain was for computers of network providers. While a bit of a stretch, this still seemed appropriate for me. There wasn’t any enforcement of the use of this domain so on my application I put some language about providing “hosting services” even though I didn’t really intend on doing anything more than hosting a web site for a friend or two.

I found my original application and the initial two-year registration fee was $100. I specified my name and my parent’s address at the time for the administrative, technical, and billing NIC handles, since it was my only permanent address. I used the name Arion Information Services on a whim as the Organization Name. There was no DNS privacy back then and as the Internet continued to explode I did get a steady trickle of junk snail-mail to my parent’s address with this name. A few years after I registered Arion.Net, I updated my NIC handles to reference a PO Box address to put an end to that. Eventually the registrars figured out that WHOIS record privacy was something people would value and started offering services to shield personal info from data mining.

The application required me to specify the name servers that would be hosting the Arion.Net zone. This was important because I needed to run my own name server. On the original application, I listed:

(hat-tip to any Simpsons fans for McBain reference)

I hadn’t wrapped my head around the concept of glue records at the time (hey, this was all new to me!) so you can see that I really shouldn’t have listed the name servers like this. It would have been better to just list ns1.arion.net and ns2.arion.net with those IP addresses instead of their CMU network names.

After waiting a week or so, Arion.Net was live! Its anniversary date is still visible in its WHOIS record:

One of the computers I hauled with me to CMU was an old 486 desktop tower computer. I ran an early Linux distribution on it which came with all of the software and tools needed to host a domain. Combined with a static IP address from CMU and plenty of bandwidth, I had all I need to host Arion.Net.

I set about configuring the BIND name server software with a zone file that had a few simple records. It was a very simple zone since everything pointed to this single Linux host! My registration listed two name servers, but I only really operated one. The other name and IP address was a secondary machine I had at CMU but I never used it for hosting Arion.Net (things ran fine with only one name server online). I ran my own name server for Arion.Net from 1996 through 2000.

Every two years I paid domain registration fees directly to Network Solutions, since they were an authorized monopoliy for the top-level domains at the time. I found an old invoice from 2000 that shows a 2-year renewal fee of $70: 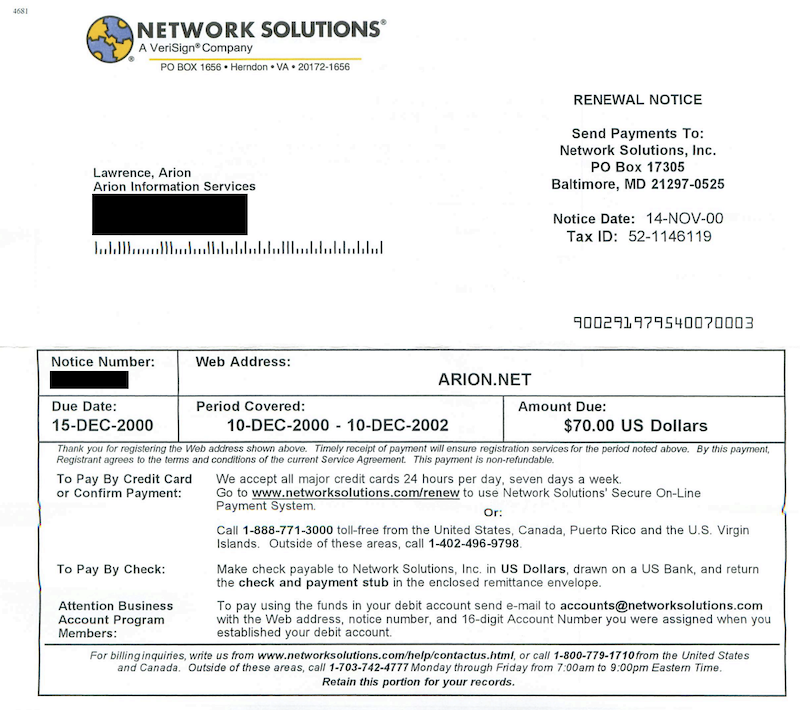 My Arion.Net server ran a simple web site using the Apache HTTP software. The earliest capture from The Wayback Machine was on 12/8/1998, a few years after it had been running. At that time, Arion.Net had a few static pages. Here’s what it looked like in the early days:

Hey, at least I didn’t have an under construction GIF or any marquee text!

The first big change really came when I implemented Drupal in 2003. I ran Drupal for more than 10 years but it was riddled with constant security vulnerabilities and required lots of maintenance. In the end, it was overly complex for my needs so I moved to a simple static-site generation platform called Pelican.

My Arion.Net server also run email services and I self-hosted email for more than 20 years using a variety of solutions. The last email platform I used was Zimbra before deciding that it was time to move on. I finally threw-in-the-towel on self-hosting and moved to Microsoft’s Office365 services a couple of years ago.

I was initially inspired to register a domain and learn about hosting from a friend at CMU named Paul Clip. Paul was a year ahead of me at the INI. He helped me with some of the initial logistics of domain registration and gave me advice on how to configure BIND.

While I may not update the content on Arion.Net with any regularity, it will continue to be the place where you can always find me. Perhaps I’ll write another nostalgic post when it turns 50.