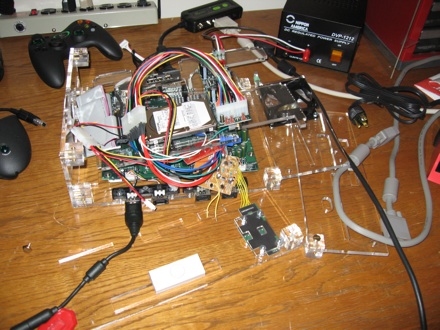 Back in 2005, I had the crazy idea that I wanted to run the XBOX Media Center in my car. OK, maybe it wasn't that crazy of an idea since a lot of other people had already tried it and succeeded. Anyway, I really like how XBMC handles music libraries and wanted to be able to use XBMC primarily as a digital music player for my car. So, I went about building a custom XBOX + XBMC solution that would be vehicle ready. Since I had my sights set on XBMC, I couldn't really use any PC- or Mac-based car solutions (this was before the days when XBMC was ported to other platforms).

I started by looking for a solution to display the output of an XBOX in a car. The XBOX is relatively flexible in this regard. It can output NTSC, PAL, SCART, 480p, 720p, or 1080i natively. With an adapter, it can also output a few simple VGA resolutions as well. The question became, what type of display of decent quality could I put in a car that would handle one of these formats? After a bunch of research I found that some of the double-DIN sized car stereo head units had pretty decent displays. 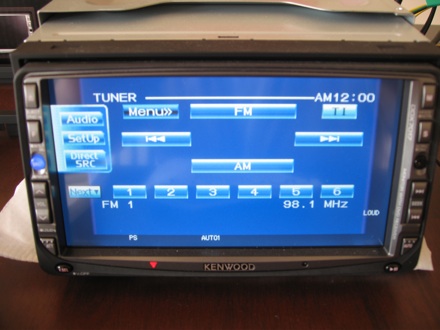 I decided to take a chance and ordered a Kenwood double DIN head unit with the goal of getting a decent XBOX image displayed on it. The Kenwood had standard S-VIDEO and composite inputs. However, I really wanted a higher quality video source. One of the reasons I ordered the Kenwood was that it also had a "navigation display" input -- a separate Kenwood navigation system could be attached using a proprietary cable. I figured there must be some way I could use this navigation input source to get a higher quality signal into the Kenwood head unit. I went ahead and ordered the proprietary navigation cable at the same time as I ordered the head unit.

My initial attempts to get the XBOX connected to the Kenwood unit were discouraging. The normal inputs (S-VIDEO/composite) provided mediocre results and I wasn't able to figure out the video signal that navigation system input used. However, after further research and some luck through trial and error, I was able to hack up an XBOX SCART video cable to connect to the navigation system input and produce a nice, crisp, and solid image. 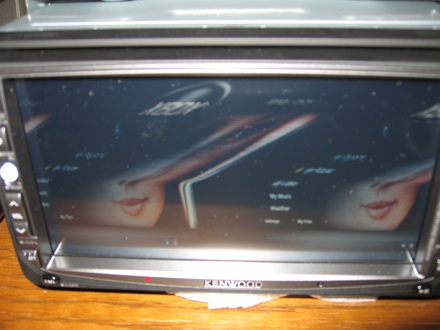 Some of the guys at mp3car.com in a discussion thread were very helpful and provided the final information I needed to get the display working.

Now that I had the video worked out, I focused on getting a custom XBOX built that would be car-ready. I had some help with this as well - I found someone online who sold XBOXs mounted in custom acrylic enclosures. I snatched one of these up and used it as a starting point. I had the standard XBOX hard drive swapped out with a 2.5" laptop hard drive in order to provide sufficient space for my music library. 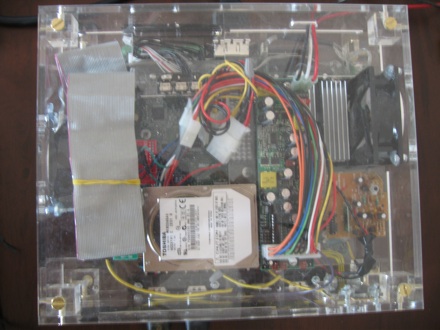 The laptop hard drive was also much better suited to a mobile environment and one where temperature changes would be pretty significant. Next, instead of using a AC-to-DC power converter, I wanted something more efficient so I did some research and found that I could use a ATX car-based power supply with the XBOX that provided a direct DC-to-DC power path.

Next, I had to find an easy way to turn the XBOX off and on. I found a great hack that involved using a battery powered doorbell to power cycle the XBOX. A quick trip to Home Depot and little while later, I had the hacked up doorbell installed and working.

By this point, you may be asking how I intended to control the XBOX? I was originally planning on using a standard XBOX wireless controller. 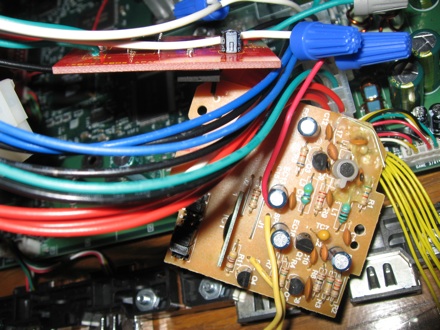 However, I ended up finding a much more elegant and useable solution. XBOX controllers are really just standard USB devices. I found that I could use a USB keyboard with the XBOX and XBMC as long as I had the right pinouts/adapter. XBMC allows arbitrary keyboard mappings to be created so that you can control just about every aspect of the program from a keyboard. I went about finding the perfect keyboard for a car and ended up with a USB keyboard originally intended to be used with a Playstation 2. 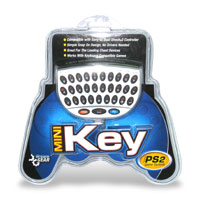 It was the perfect size and allowed me to use it for both controlling XBMC and also typing in actual artists/song names when I wanted to search for specific songs.

When all of the pieces were put together it was pretty slick and worked very well. I took a video to document how the system worked. So what became of this creation? Well, unfortunately I never got a chance to install it in a vehicle. I sold the car I was intending to put it in and my current car doesn't have room for a double-DIN head unit anywhere. Oh well. It was a fun project though. 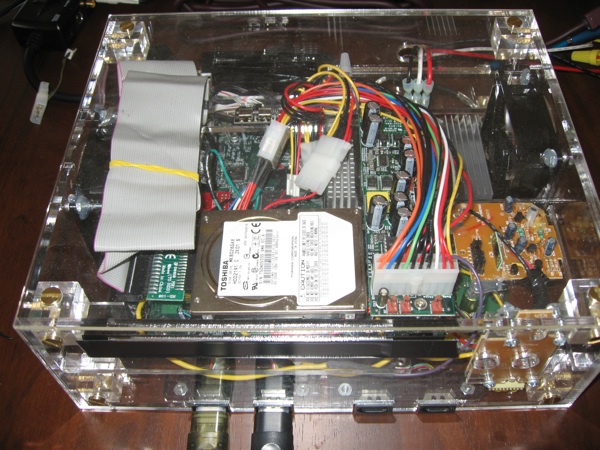