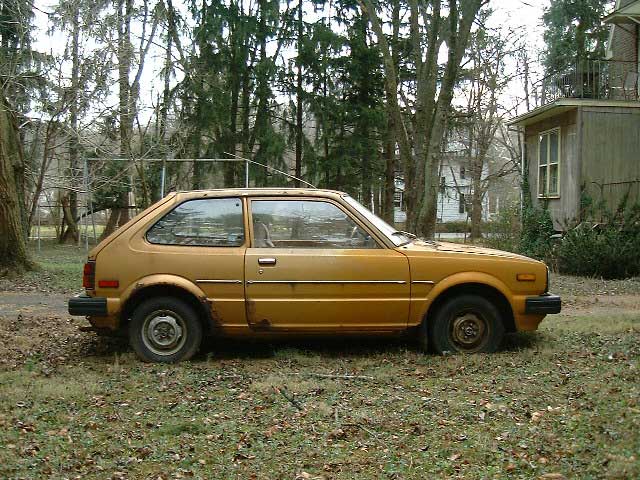 This web page is dedicated to my first car, a 1981 Honda Civic.

I believe my parents first acquired the Honda in 1986 or 1987. My parents used it as a second car and since it was a hatchback, it was used whenever we needed to move anything. I remember that we always would use the old Honda to haul a Christmas tree back to the house every December. (In fact, if you look at some of the pictures below of the interior carefully, you may see some pine needles!).

The car was titled in my mom’s name, however, I eventually inherited it and became the primary driver. I started driving the Honda regularly when I first got my drivers license. Starting with my Junior year in high school, I drove the Honda every day….. little did I know that I would be driving it for the next 9 years. I drove it all through high school, college, and briefly after I finished graduate school! The car was never very attractive (often referred to as “puke brown colored”), but it sure was a solid vehicle!

During my 9 years of driving the Honda, it slowly deteriorated. However, with this deterioration came many new “features” for the car. The pictorial below shows off some of these special features and gives some more history about this wonderful vehicle!

First, lets start out with some pictures of the fabulous vehicle! 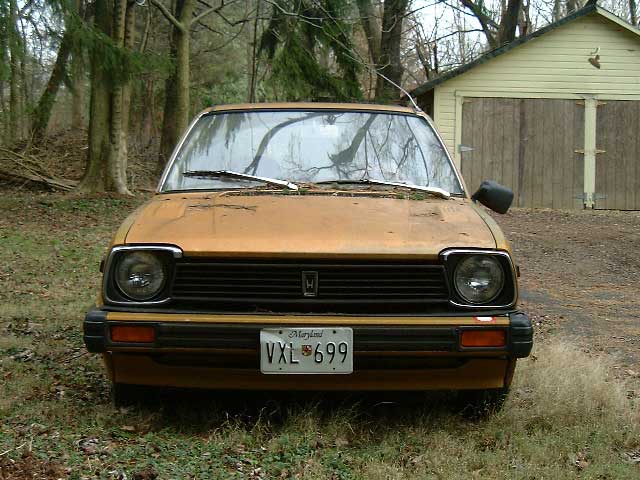 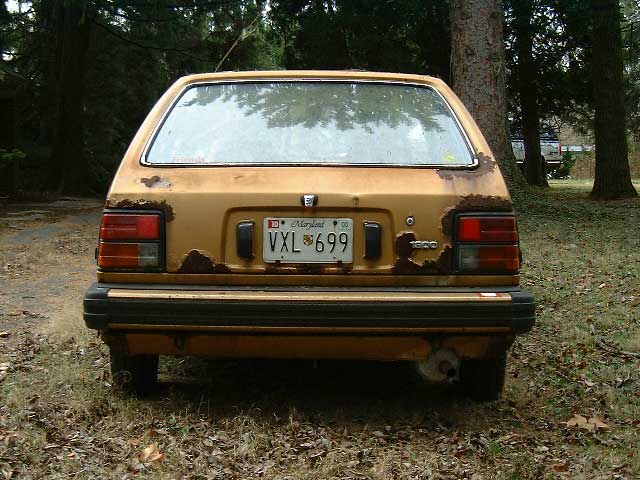 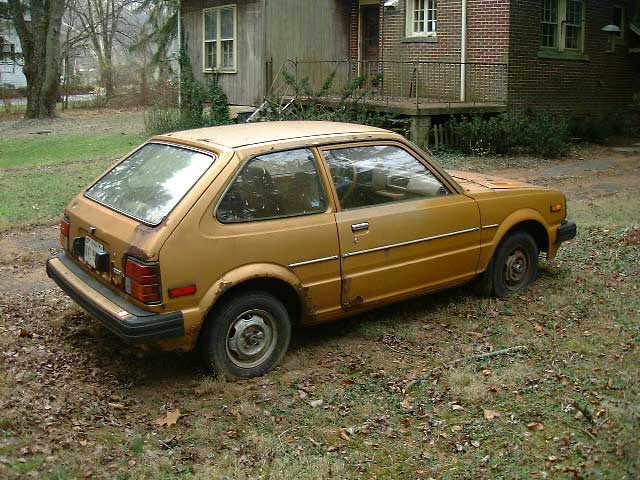 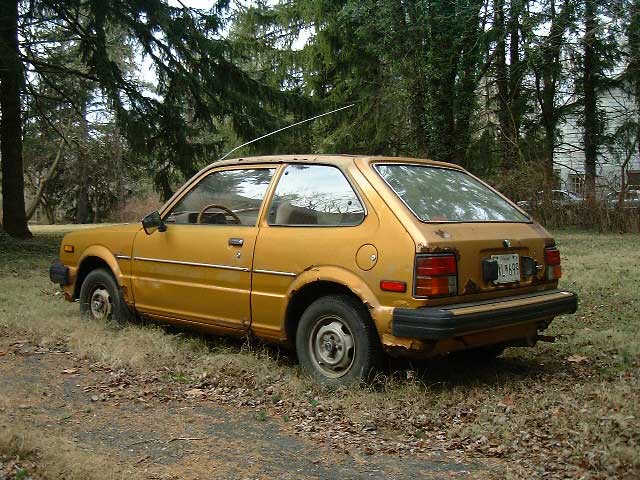 The Honda was quite a vehicle. I mean, with its 4 cylinder engine and approximately 1335cc of displacement, who could ask for more power behind the wheel? For those of you not familiar with the term “cc”, its a measurement of engine displacement in cubic centimeters. Note, not may cars are measured in “cc” units. However, its very common for motorcycles. In fact, many motorcycles have engines that approach the size of my old Honda! I’m not sure how much horsepower the Honda had, but I’m sure it was less than 100hp!

Opening the front hood revealed the massive powerplant (yeah, the 1335cc engine). During the years that I drove the Honda, a small hole appeared in the hood near where the air filter was. When I first realized this, I had idea for adding some humor to the car. My plan was to get one of the toys from “Alien” and stuff it through the hole in the hood so that it looked like it was coming from the engine, but alas, I never got around to it. Oh well… 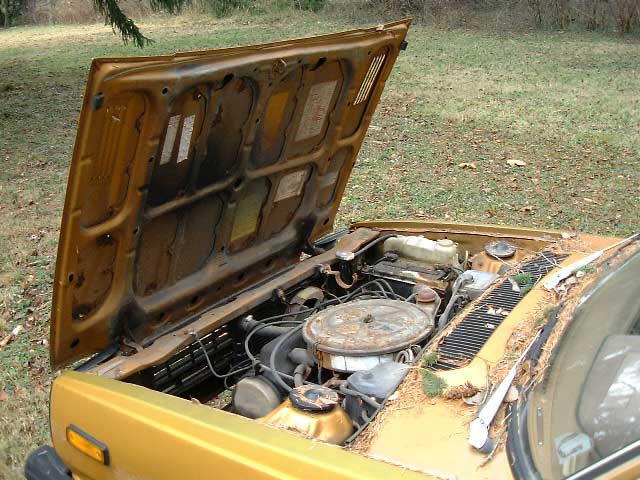 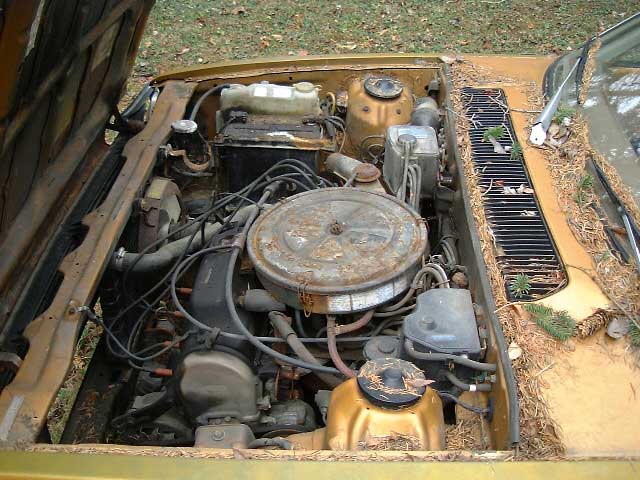 While the Honda was in OK shape when I first started to drive it, it did develop a slight rust problem as the years progressed. The first picture below shows the model number (Civic Hatchback 1300) and some of the rust. The second picture is my favorite. It seems that at some point, one of the prior owners of the Honda had “Ziebart Rustproofing” performed on it. Seemed as though it worked pretty good, eh? Anyone have an e-mail address for Ziebart? I should really sent this picture to them…… 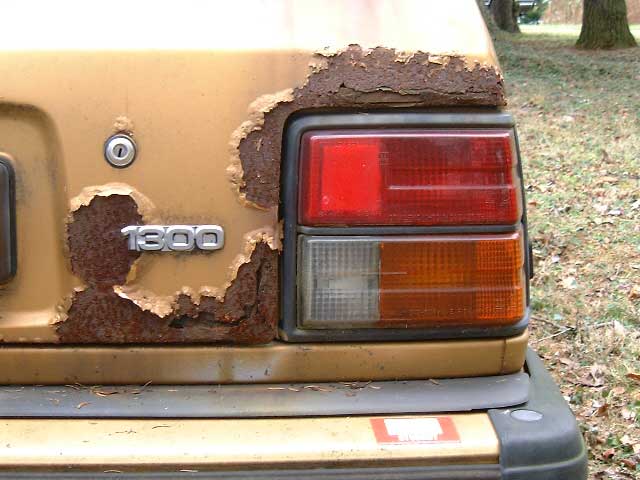 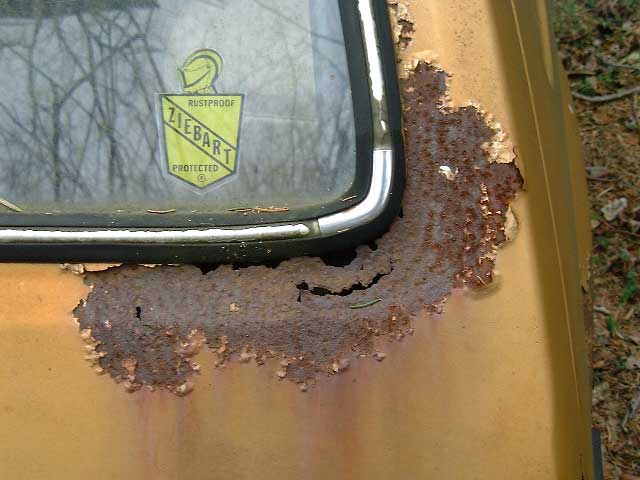 The interior of the Honda wasn’t really luxurious, but it was functional. As you can see from the pictures below, the seats had covers. After having the car for a year, the plastic and foam of the seats had deteriated so much that there was a lot of exposed metal. The seat covers became a necessity because of that. As you can see from the picture in the center, the door handle is missing. It broke off early in the Honda’s lifetime. In order to close the door, I had to grab ahold of the door by the window trim. If you look closely in the detailed picture, you can see the imprint from where I would grab the trim to close the door.

The hatchback area can be seen in the third picture. With the front two seats positioned at a comfortable setting they basically touched the rear seat area. Therefore, I kept the rear bench folded most of the time. However, the back seat was used once in a while. In high school, a bunch of us used to go off campus during lunch. I was often nominated to drive (not sure why actually). At one point on one of our lunch time excursions, I was able to fit the entire defensive line of the football team in the Honda! That’s right, five really big guys (myself included). 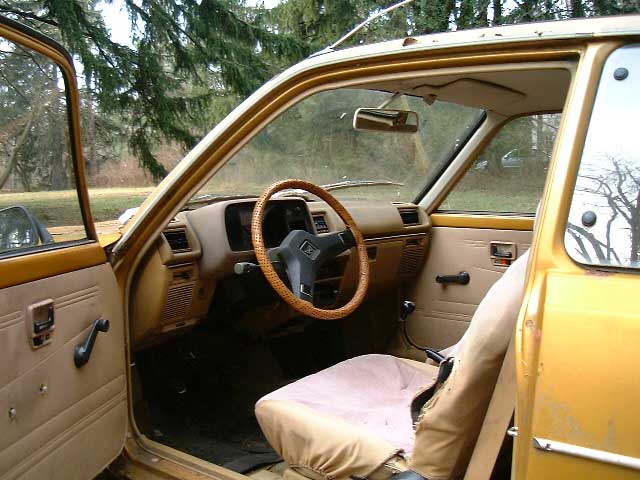 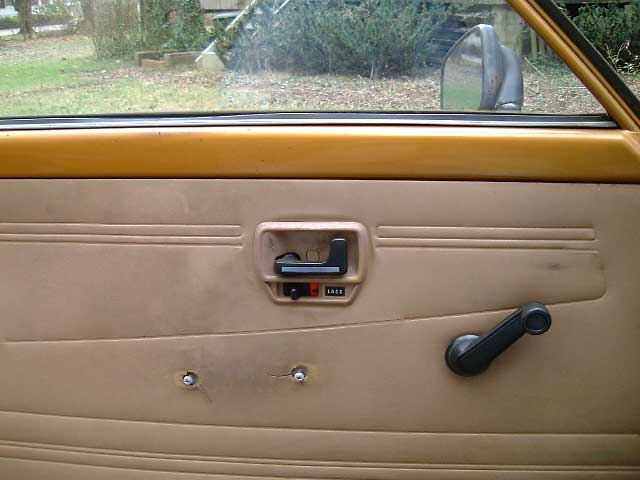 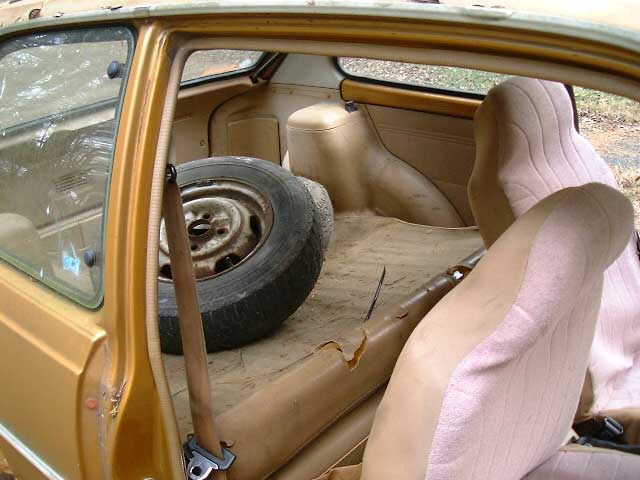 From The Drivers Seat

The Honda was spacious for a sub-compact. Even though I’m a pretty tall guy (6‘2”), I has plenty of space in the drivers seat. The first picture below shows the view from the drivers seat. Although the speedometer says the Honda could reach 85mph, I could never get it above 75 (it started to shake really bad above that speed). There were always some loose cables dangling down near the gas petal. I don’t know what they were for, but I didn’t bother them so they didn’t bother me.

The second picture shows the rear view mirror. If you look closely, you can see that there are two screws holding it up. Yeah, it broke off sometime in the early nineties. All attempts to use glue to refasten it failed miserably so I had to resort to drilling two holes through it and screwing it back to the ceiling. 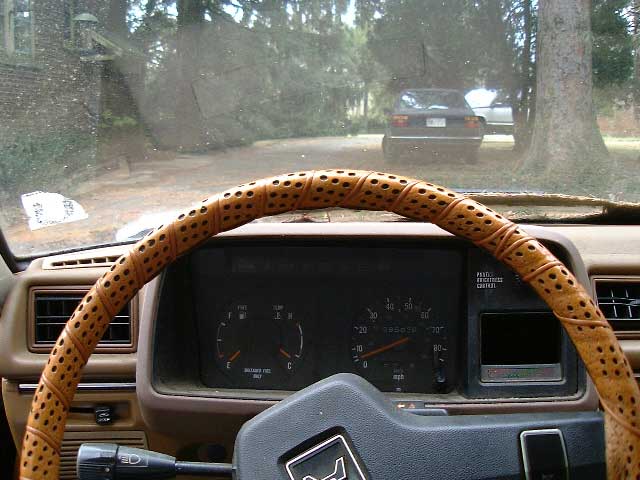 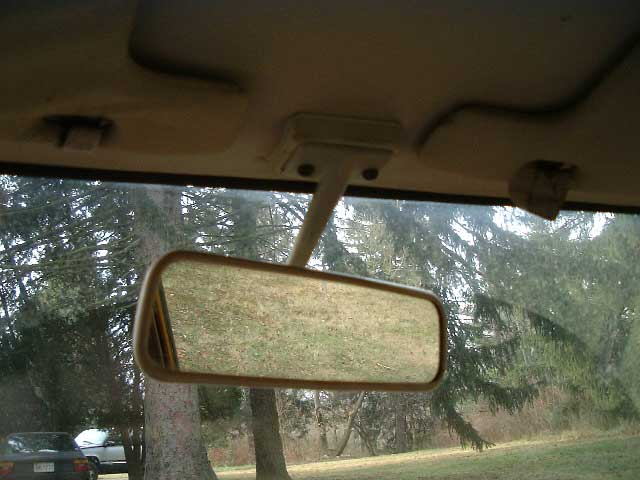 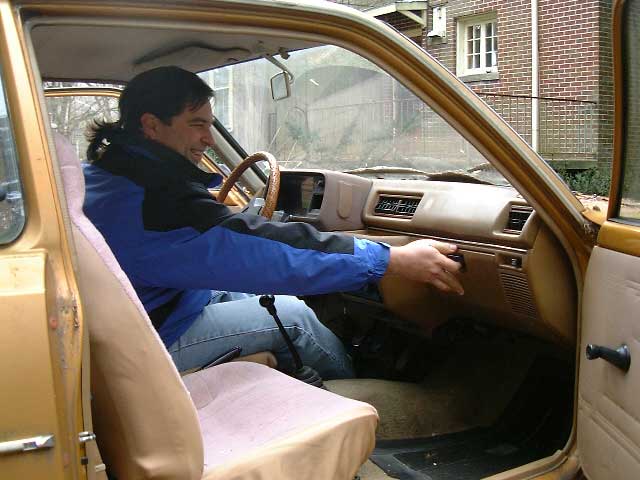 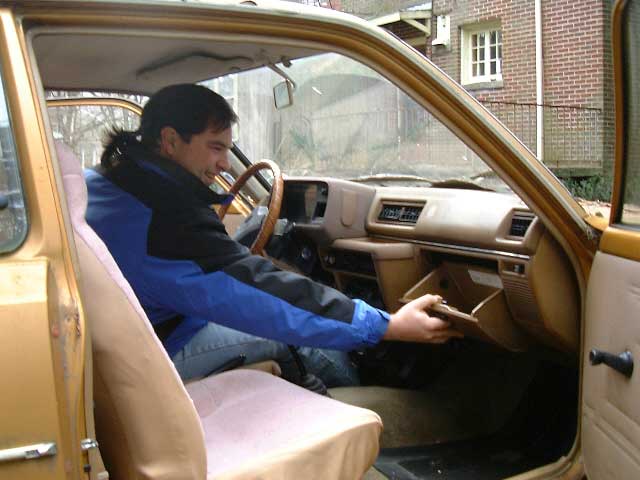 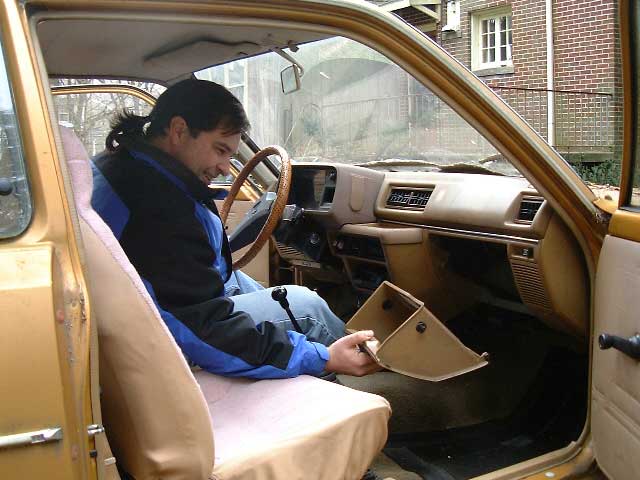 Alas, the rear windows of the Honda were broken. I mean, they were still attached to the car, but the latches that held them closed were broken. If you look carefully at this picture, you can see my attempt to fix this with some duck-tape. It never really work very well. Whenever I closed the front door while the windows were rolled up, I could hear the back windows rattle from the air pressure. 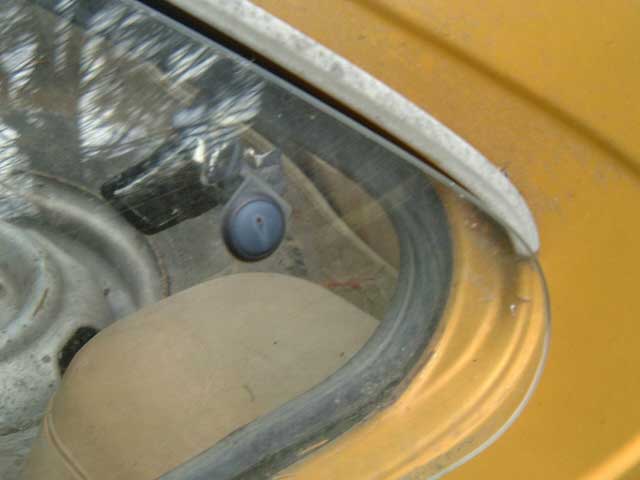 Well, we’ve come to the end of the tribute to my Honda. It was a great car. Just think, I could park it on the streets of Philadelphia and still sleep good at night. I mean, who would want to steal it? Near the end of its life, my parents mechanic was afraid to put it up on a lift because he thought the frame was so rusted it would just crumble. The car sat idle in my parents back yard for the last year of its life (where the pictures were taken). Amazingly enough, my parents found a non-profit organization to donate it to (that actually wanted it!). 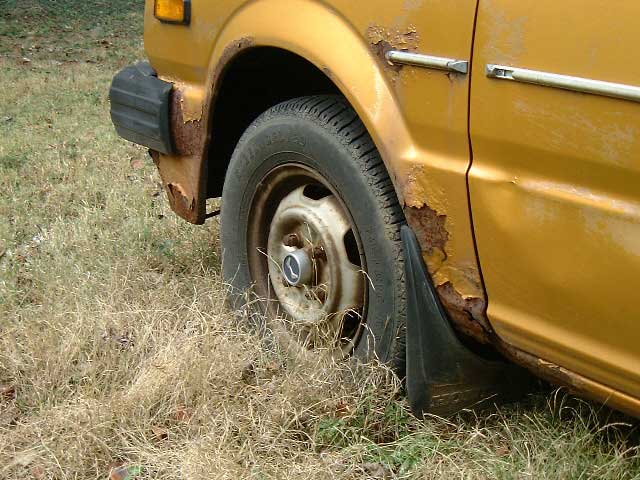